Built beside hills, Ocean Park is a world-class theme park that combines marine and terrestrial animals, mobile games and large-scale performances. It is also one of the most popular theme parks in the world with the largest numbers of visitors.

Hong Kong Ocean Park is located beside the sea and surrounded by mountains. It has the largest marine aquarium and theme park in Southeast Asia. It consists of two parts: the Waterfront beside the mountain and the Summit on the mountain, which are connected by the sea-view cable car. It has eight themed areas, including Amazing Asian Animals, Aqua City, Whiskers Harbour, and Marine World. 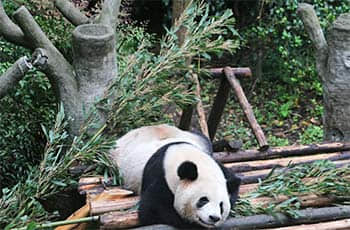 There is the ‘Living Fossil’ Chinese alligator from the Yangtze River, known as the ‘Dragon of the Earth’. It also displays two giant pandas – Ying Ying and Le Le – as well as red pandas from the temperate bamboo forest in China, named Taishan, Rourou, Congcong and Lizi, who are in HK for their very first time. It also houses the critically endangered animal – Chinese giant salamander. It displays the Asian small-clawed otters and a variety of Asian birds with bright colors. There is a goldfish pavilion featuring the latest and rarest varieties such as the Black Oranda, Wallpaper Pattern Carp, Blue Phoenix, Ink Carp and Red-White China Gold fish etc.

Aqua City includes Grand Aquarium, Symbio, Sea Life Carousel and Sky Fair. Grand Aquarium is one of the top ten aquariums in the world. There are around 5,000 precious fishes from over 400 species. Inside the Grand Aquarium, visitors can see the world's largest viewing dome and visit the amazing underwater world. Symbio features the world's first and only 360° water screen show, with a height of nine meters. Sea Life Carousel is a large-scale carousel with the theme of marine animals. In Sky Fair, visitors can ride in a colorful helium balloon with a diameter of 22 meters, and go up into the air to enjo 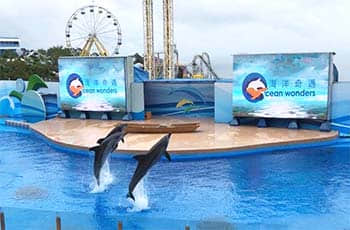 Inside the Marine World, there are the Chinese Sturgeon Aquarium, Ocean Theatre, Pacific Pier, Sea Jelly Spectacular, Ferris Wheel and Garden of Joy. Each site offers its unique attractions and will provide visitors with different experience.

The Rainforest includes Expedition Trail and The Rapids. Walking through Expedition Trail, visitors can meet some of the world's most striking tropical species, including Pygmy Marmoset, the smallest monkeys in the world, the largest capybara in the world, the kinkajou displayed in HK for the first time, the blue poison dart frog and the piranha. The Rapids is the second on-water amusement facility in the Ocean Park. The visitors will board an exploring rubber boat and shuttle through long, curved tropical torrents to enjoy the tropical scenery along the way in the splashes of water.