Home » China Guide » Travel Articles » How do you cross the street in China?

Crossing the street is doubtless something you do every day in your hometown or city, probably without even really thinking about it. This simple action may not be so straightforward when you are faced with China’s heavy traffic.

Drivers in China are supposed to slow down as they approach a pedestrian crossing and stop when people wish to cross. However, in reality, this does not always happen, and since the traffic safety law was introduced in 2003, these rules have rarely been enforced. The good news is China is getting better on this issue. With more middle-class Chinese traveling to other countries where drivers do generally give way to pedestrians when they are supposed to, awareness of the pedestrian crossing is growing.

Today, you will see many traffic police across China taking steps to make it safer to cross the road. In the past few years, the authorities have been campaigning to promote “pedestrian crossing courtesy” and surveillance cameras have been installed near pedestrian crossings without traffic lights to catch motorists who fail to observe the rules.

Likely as not you have seen photos and videos on the Internet of mind-blowing traffic jams in China. There are several conspicuous reasons for China’s traffic problems.

First, there is China’s massive population, of 1.412 billion in 2020, with 901.99 million living in urban areas and 509.79 million staying in rural areas, according to the seventh national population census conducted in 2020.

Second, individuals and families owning cars are growing. For many white-collar workers in Chinese cities, owning a car is a status symbol, although public transport would be perfectly adequate for their traveling needs. China now has more than 300 million registered vehicles – almost the same number as people in the United States. Along with the masses of new cars appearing on the roads over the last few years came an overabundance of new and inexperienced drivers.

The government has introduced schemes to make the traffic more manageable such as Beijing’s odd-even rule where cars can only be driven on the roads on odd or even-numbered days according to their number plates. Subways (Metro) are constructed in major cities across China to overcome the transportation problems in the urbanization process. The public transport system is convenient, and constantly being improved and upgraded as the population grows and encouragement for people to use it.

In some cities, there are several options to keep pedestrians safe from the traffic, are underpasses, and these often link up with a network of underground walking streets.

What about using a crosswalk or ‘zebra crossing’? 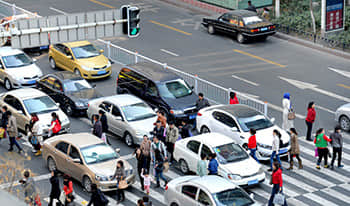 The rising number of automobiles and reckless driving are the main causes of increasing road accidents nowadays. To make it safer for the pedestrian to cross the street, more and more crosswalks were installed in China. Motorists are required to give way to pedestrians on the crossing. But in reality, many motorists are ignoring the rules of these crossings and choosing not to give way to pedestrians, which is dangerous if pedestrians are assuming that all vehicles will stop as they step onto the crossing.

In 2018, the Ministry of Public Security kicked off its “Yielding to Pedestrians” campaign, which is an effort to keep the city’s streets safe for everyone. Motorists should yield the right of way to pedestrians who have lawfully started to cross the roadway or are otherwise on the crosswalk. At an intersection with traffic lights, a driver must yield the right of way to a pedestrian when the pedestrian has stepped on the crosswalk and when the “walk” signal is on. Those who do not slow down as they approach a pedestrian crossing or stop for a pedestrian will be fined 200 yuan (US$32) and will lose three points from their driving license, as stipulated by the law. Although the fine is paltry, the three points could be more of a deterrent. A Chinese driving license has 12 points, and if all of them are lost in a year the motorist must take a road safety class and sit a test to have the license reinstated.

Cyclists must dismount when using the pedestrian crossing.

The Rule of Size and Numbers

There is an unwritten rule about who has the right of way, and it is simple a question of size and numbers. A bus has right of way over a car, although a big heavy truck can go in front of the bus.

The safest way for you to cross the road is with a group of pedestrians, which is one reason to head for a pedestrian crossing. In some cities there are special crossing police on the street corners, frantically blowing their whistles at both traffic and impatient pedestrians.

What should you do? 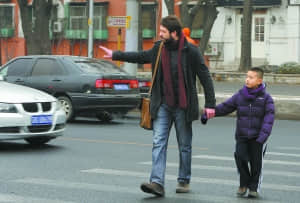 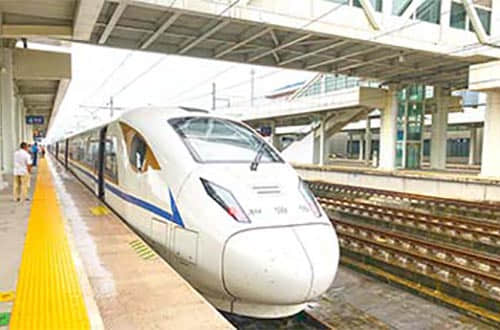 How to Take a Train in China 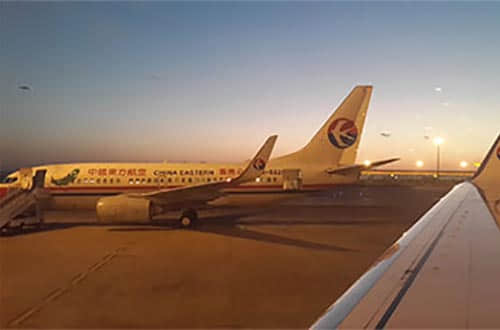 Why are Chinese Flights Always Delayed? 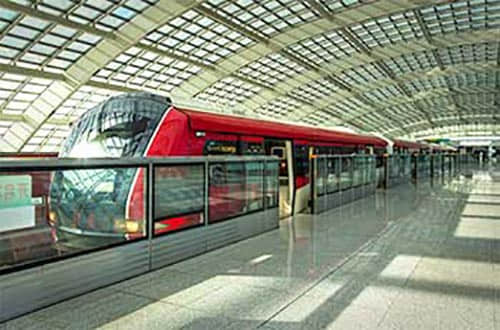 Taking the Subway/ Metro in China